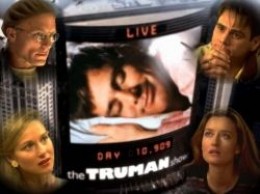 This movie is the mother of all reality shows on television. It takes the idea of Big Brother or Big Boss wherein participants are closeted in a house for 3 months, and extends it to the whole life of one individual.

Truman is born and grown-up on the sets of the reality show. A whole city is constructed as the set complete with neighbors, offices, and the beach. Everything including the weather is simulated. Except Truman, everyone else is an actor. The filming is done through hidden cameras and the show is televised round the clock to the world. Everything is fine until Truman finds some inconsistency about things happening to him and decides to investigate.

Now in the spiritual tradition, the world we live in is also a sort of a self-created reality show which sustains itself. Everyone is already hypnotized into believing what his identity is, based on which he or she lives. However, there are some individuals who find inconsistencies in the worldly affairs and decide to investigate the true meaning of life and become spiritual seekers.