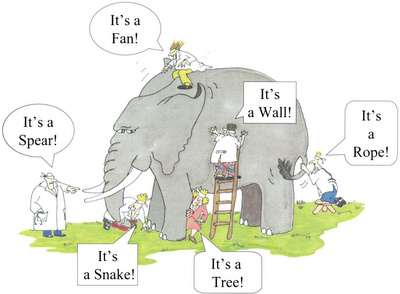 Thus, each described the elephant differently, but each was sure that his own version was the true description of the elephant. They did not realize that each one touched only a part of the elephant. Each blind person had only a one-sided truth. They started arguing with each other, each sticking to his own point of view. The argument ended up in quarreling and fighting. The king and his ministers rolled with laughter as the blind men continued to quarrel and fight with each other.

The origins of this story are unknown but it appears in almost all religious literature through the world. There are many many ways to look at this story and understand it. Just goes to prove what the story intends to convey.

When the blind truly open their eyes, they will see there was no elephant there.