If you ask a question it will obstruct the answer. If you don’t ask the question, you will never find the answer. What will you do? 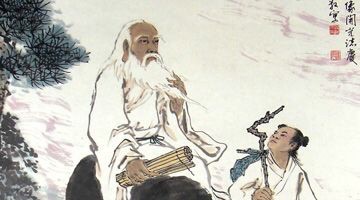 Koan is a technique for awakening by silencing the conceptual mind.

WHAT IS A KOAN?

A Koan is a statement, a dialogue, a story or a question which cannot be understood or answered by logical thinking. In fact, logical thinking is the biggest hindrance in understanding the meaning of the Koan. Some famous koans used by Zen masters are

HOW IS THE KOAN USED?

The Zen student requests the Master to give him a koan for practice. The Master understands the specific mental snags in the student and gives him a koan which is most helpful in his practice. He also explains to the student in private what he must do with the koan. The student is instructed to constantly keep the koan in mind and try to grasp its hidden meaning. He has to think of the koan while walking, eating, sweeping, and while doing all the daily activities.

When the student believes he found the answer or when the student meets the Master during the scheduled times, he must explain what he has understood. If the Master finds evidence to believe that the student has really understood, he will certify the enlightenment of the student else he will drive him away asking him to put in more effort into the koan.

Mumon, a great Zen Master, said to his students that they must make their whole body and mind into the koan in order to penetrate it.

HOW DOES THE KOAN PRODUCE ENLIGHTENMENT?

Although the koan is a paradoxical statement and appears to be some sort of puzzle; it is not something that can be solved using a mental trick. It cannot be understood in conceptual terms at all. The purpose of the koan is to silence the conceptual mind completely as this is essential for awakening.

A statement that one does not understand makes the mind go on hyper drive. The mind turns and twists the question to find out its meaning and find an answer in one way or another. As long as the student keeps giving conceptual answers, the Master keeps sending him away. Even if the student realizes that there is no conceptual answer and says so, the master might tell him that knowing it is one thing but feeling it in one’s bones is another.

However, with constant practice with a koan, the student’s mind finally falls silent on its own accord and then whatever answer he gives will be spontaneous not based on rational thought. This is the first step to awakening.

The most famous collections of Koans are found in two books – The Blue Cliff Record and The Gateless Gate.

Thus, each described the elephant differently, but each was sure that his own version was the true description of the elephant. They did not realize that each one touched only a part of the elephant. Each blind person had only a one-sided truth. They started arguing with each other, each sticking to his own point of view. The argument ended up in quarreling and fighting. The king and his ministers rolled with laughter as the blind men continued to quarrel and fight with each other.

The origins of this story are unknown but it appears in almost all religious literature through the world. There are many many ways to look at this story and understand it. Just goes to prove what the story intends to convey.

When the blind truly open their eyes, they will see there was no elephant there.