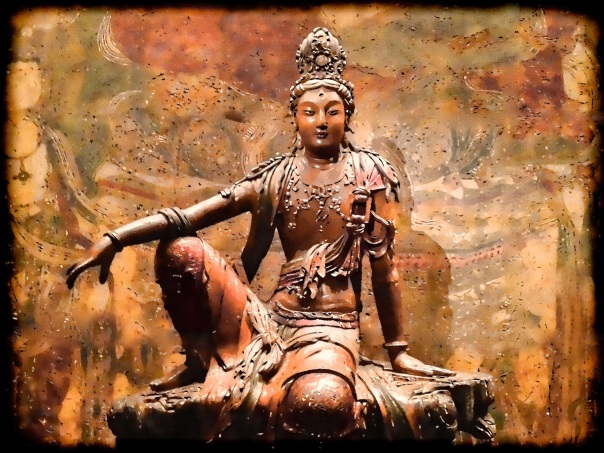 Arhat and Bodhisattva are commonly understood terms in Buddhism. The Arhat is the pinnacle of spiritual achievement as mentioned in the Theravada scriptures while the Bodhisattva is an ideal which spiritual seekers aim for in order to achieve Buddhahood.

There are several sects within Buddhism, the main ones being the Theravada, also called as Hinayana and the other being Mahayana. Arhat is a term used by the Theravada sect while Bodhisattva is used by the Mahayana. And there is some amount of debate among the Buddhists on these terms and what they signify. In order to understand what this means, it is important to learn the context of the terms used.

In many Theravada texts, the Buddha is described as an Arhat, one who has completely extinguished birth and death. An Arhat is not reborn in any realm. This is the highest spiritual achievement, the goal of all meditation and practice. The Arhat is the final stage of 4 stages of spiritual evolution – the stream enterer, the once returnee, the non-returnee and the Arhat.

The stream enterer is one who has entered the path of Nirvana and within a maximum of 7 rebirths will attain to the level of Arhat. He cannot go back into the realm of suffering. The once-returnee as the name suggests is reborn only once before he becomes an Arhat. The non-returnee has no more rebirths in the lower realms but has not yet become an Arhat. The Arhat is one who has extinguished all desire, all ignorance which leads to rebirth.

There is a distinction which is made between the Buddha and the Arhat. A Buddha is one who discovers the supreme path with his own efforts, without recourse to a teacher. The Arhat on the other hand achieves Buddhahood but with the guidance from a Buddha. There is another category called Solitary Buddhas or PratyekaBuddhas, who also become Buddhas without any teacher, but they are unable to teach others. It is mentioned in several texts that after his disciples became Arhats, the Buddha sent them all across the land to preach the Dhamma.

Bodhisattva, which is the Mahayana ideal, is someone who has taken the vow to save all sentient beings, wherever they are however innumerable they are, from ignorance and the rounds of rebirth and until then, he does not enter Nirvana. In order words, he does not free himself until he has helped each and every other being to free themselves. The Bodhisattva willingly gets reborn in order to fulfill his vow.

A Bodhisattva is also someone who is eventually going to become a Buddha in a time to come. So if you are intent of attaining Buddhahood, you need to take the Bodhisattva vow and help people in innumerable lifetimes, leading to the perfections and eventually to Buddhahood.

The Mahayana Buddhists accuse the Arhat of being selfish, looking after his own salvation without helping others. Monks in the Theravada tradition go off into the jungles away from society, beg for their food and spend their time in meditation in order to become Arhats. The Mahayanists claim that you cannot become a Buddha unless you have the Bodhisattva attitude.

The source of the Bodhisattva ideal can be traced to the stories of the past life of Buddha as told in the Jataka tales. In each of these stories, Buddha recounts how he helped other people through millions of previous births as a human being or as animal, on his path to becoming the Buddha.

I believe the people who make a dispute out of Arhat and Bodhisattva have not really grasped the essential teaching of the Buddha. The core of the realization which makes a Buddha is that there is no Self, separate from the rest. It is not that you strive and meditate to destroy the Self. The Self does not exist right from the beginning. What you do is to eliminate the illusion or notion of its existence.

So looking at things from this view, there are no people to begin with. And if you really understand in your bones what impermanence is, what emptiness is, there is no more dispute. Then there is no difference whether you help people or not because you are not there at all and neither are they. When you eliminate the notion of self, there is no me and no others, so no sentient beings to save.

​But so long as you see others suffering, you also have a subtle notion of self. When you do away with this, whatever you do will be a help to people. You see, there is a limit to explanations with words.

If you are taking the Bodhisattva vow, it is good. It helps to direct the mind outwards away from the self-centeredness. But eventually, your goal is to become the Buddha when you no longer hold the view of Self. If you are coming back again and again into the world to help people, you are only increasing the delusion. On the other hand, if you consciously strive to become an Arhat, you are caught in the deepest swamp.

The true son of Buddha only looks directly into the mind, discovers there is emptiness, and stays there with nothing further to be done.