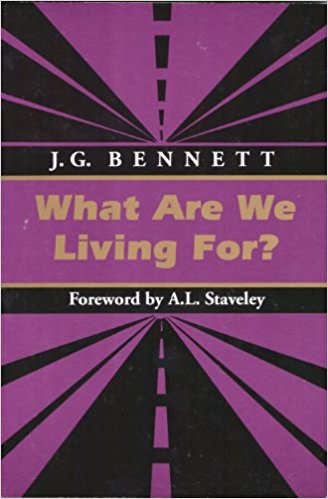 What Are We Living For by J G Bennett

This is a small book of around 100 pages yet it is packed with a sweeping criticism of the current state of affairs of humanity. Although the book was first published in 1949, most of the observations are relevant even today and I believe they will remain relevant for centuries to come.

Bennett was deeply influenced by the ideas of Gurdjieff in writing this book. He highlights the manner in which humanity is sleeping by presenting an incisive criticism of three areas of human endeavor – education, science and religion. Finally he also suggests a way for individuals to wake up from this horror we call life.

He observes rightly that while there are innumerable efforts made by people through the ages to change the human condition, only a very few have focused on the root cause of all human suffering – the basic human nature. People simply hope for the best in this case, which really means ignoring the problem. He challenges the notion that man is truly more than a mere thinking animal.

On education, he says

In our modern civilization (as it is called), people are subject to political propaganda or the suggestions of advertising agents… No free individuals exist; everywhere people’s lives are determined and governed by a series of stereotyped external stimuli against which they have no resistance at all. The direct cause of all this is our so-called education. By the process of this education, men and women are produced who are perfectly adapted to a mechanized existence.

When children are born, they are subjected almost from birth to influences that will inevitably produce in them such characteristics as vanity, self-will, self-importance, distrust, deceitfulness, suggestibility, dependence upon other people, and at the very root and center of their being, egoism… Children are made to think and to feel by influences that are brought to bear on them almost from birth that it is only their external manifestations seen by other people that determine their value.

An influence present in almost every educational system is the stimulus to effort, not through inner decision, but through competition and reward… No effective steps are taken to develop in children the realization that one’s own impartial judgment of oneself, made inwardly, without reference to the good and bad opinions of other people, should be the basis of one’s own actions.

Apart from the absurdity of learning by heart “facts”, with no reference to their significance or interpretation, there are many kinds of so called intellectual disciplines that are taught in a way that has very serious after consequences – that is they are taught without reference to any concrete reality. The result is that into the very mechanism of thought there enters an inability to distinguish between words and the meaning for which they stand.

A man who does not know his own mind, who cannot make decisions valid for all his moods and all external circumstances, cannot be said to possess an “I”. … to have an aim in life chosen by oneself on the basis of one’s own self judgement, and not as a result of accidental influences or deliberate suggestion from without is one mark of a real I. to be able to make self-imposed efforts for the attainment of such an aim without the stimulus of anything either feared or hoped for from other people is another mark.

A remarkable feature of the history of science is that in spite of the obvious impermanence of all scientific theory, there is always a tendency to draw final conclusions, affecting our attitude toward man and his place in the universe, from the particular theories that happen to be fashionable at a given moment. Although scientists who think seriously about these matters know very well that a theory is only a convenient method of description and not a statement about fact, they are no less prone than others to condemn as unscientific any views that do not conform to the theories in vogue.

Many people consider it quite legitimate, whenever any views about God and the universe are expressed, to ask the question – How do you know about this? Can it be scientifically proven? Implying that scientific proof is a well-established and proven procedure… it fails to allow for one indispensable element in scientific activity, and that is the ‘leap in the dark’ by which a new hypothesis is formulated.

My purpose in making the distinction between science and technology is to draw attention to one point often overlooked – the assumption that technological achievements presuppose the prior existence of valid knowledge. If this were true, it would follow that the achievement of certain results would be evidence of an understanding of the process by which results are achieved. … a very simple, obvious case – we all eat and more or less successfully digest our food, but this does not mean that we understand the process of digestion, or that any pronouncements we may choose to make about the energy that is needed for the life of man and the nature of this energy must be valid.

We take for granted that we are better than our ancestors and that our modes of life are superior to theirs… With all progress of biological science, we have scarcely succeeded in domesticating a single animal or a single plant not known to our early ancestors.

On religion, he says

Among the many strange things taught to children in their geography lessons are statistics of the world’s population distributed into various racial, economic and cultural groups…. We only know too well that these divisions mean very little in regard to the inner conventions and beliefs, the way of life and the dominating motives of the people concerned.

The concern of the founders of the great religions was not to offer man something external to himself, a body of doctrine, an institution, a ‘something’ to occupy a certain place in his life to safeguard him from particular dangers and to assure him particular benefits… it is an invariable characteristic of the authentic teaching of the founders that they rejected all theological speculation and ethical theory and emphasized the fundamental principle of self-perfecting through conscious labor and intentional suffering.

Bennett challenges us to think whether man is really better than animals. When it comes to raising a family and caring for and protecting the young, there is not much difference between man and animal. However, man has the possibility to be different when it comes to how he uses his free time and energy. Unfortunately, man devotes such time to activities of enjoyment and leisure and not working on becoming a free human being. The reason, as Bennett points out, is that man already thinks he is complete in all respects and nothing more needs to be done.

Man suffers from a tendency to self-deception and illusion for which he cannot be blamed except in so far as he fails to struggle against it. … there is a cosmic purpose that can be served only by free beings. In each one of us, the seed of free individuality is planted from above. The choice before us is slavery to that which is below or service to that which is above.