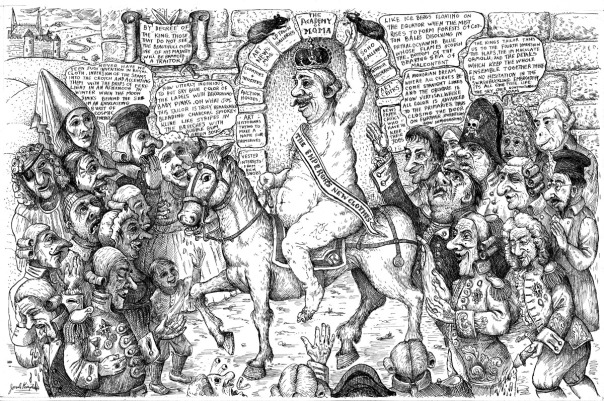 The emperor’s birthday was nearing and many celebrations were planned in his honor. For this special occasion, the emperor wanted to look his best & wanted a new dress stitched for him. Tailors from across the kingdom were invited to present their designs. Although tailors came from far and wide, the Emperor did not like any of their designs. He announced a big reward for the person who could make the most unique dress for him.

Then one day a stranger appeared in the court & claimed to have the most unique fabric in the world with which he would make the emperor’s birthday suit. The specialty of the fabric was that it could be seen only by one who was wise and could not be seen by one who was foolish. He produced a sample of the fabric from his bag and displayed it to everyone in the court. Although no one could see or touch the fabric, they all exclaimed that they had never seen such a thing. Even the emperor could not say anything for fear of being discovered to be foolish. He had to agree that it was indeed a special fabric most suitable for his birthday. The stranger was then allowed to spend several weeks weaving the imaginary clothes.

On the day of the emperor’s birthday, he got ready to wear his unique clothes. He got down to his inner wear & the stranger put the new clothes on him. Although no one could see the clothes they all appreciated the dress because they did not want to appear foolish. Even the emperor could not say anything. He even rewarded the stranger for his superb work.

Dressed in this invisible suit, the emperor rode his royal horse through the city wearing acknowledging the birthday wishes of his people. All his citizens, seeing the emperor wearing his inner wear on his horse, were in a shock. But no one said anything for fear of attracting his wrath. Suddenly one child in the crowd started laughing & pointing to the emperor said – Look there. the king is not wearing any clothes. The king is not wearing any clothes. ha ha hah!

The emperor immediately realized the truth & rushed back to his palace in shame.

In the very effort to appear wise, shines our stupidity.

Life is such. When there is a great desire for something, it makes us blind. We ignore the truth staring in front of our eyes. We do not believe our own intuition but believe what someone else is saying.

Fear of being termed foolish makes us do things & say things which are contrary to what is. We accept other people’s interpretation of the situation even if we are able to see the same situation differently. The underlying assumption is that the crowd cannot be wrong, all at the same time.

The crowd on the other hand is afraid of itself. So only a small child, pure of heart, without any preconceptions, one who has not yet become a part of the crowd, is not afraid to speak the truth.

We are all like that Emperor who goes about the world displaying our good qualities, nobility, holiness, acumen and spirituality without realizing that others, even though they may see through our nakedness, pretend to see our clothes.

Nakedness is our truth. Even if we wear layers of clothes, fundamentally we are naked inside. How can we ignore that fact? When all the traditional dresses and functional uniforms are taken off, we are all the same.

Going further when we divest ourselves of our stories about who we are in terms of name, family, education, designation & achievements; fundamentally we are pure emptiness, the stuff of what existence is made of. From this place you will never see any clothes however hard someone like that stranger would make you believe that the clothes exist. Because now you can really see and the child in you starts laughing.